Alright, I watched a few of the best foreign film Oscar nominees this week along with some other foreign stuff so let’s take a trip around the world as I do the written equivalent of yammering.

So far, this is my favorite out of the bunch. Usually can’t go wrong with a foreign gangster film, for example Un Prophete (Audiard, 2009) from a few years back, this one is particularly interesting given that it focuses on black market Belgium bovine hormone trafficking which I am sure most people didn’t know existed until just now. After doing a bit of internet research (looked at the first two Google results) I gather the gangster aspect of the film stems from an incident in the mid-90’s when there was a debate over banning hormones in beef production and a public official was ‘assassinated’ by ‘contract killers’ of the ‘hormonenmafia’. That being said, the film focuses much more on the main character, Jacky Vanmarsenille (Matthias Schoenaerts), and his internal conflicts rather than guns and drugs and gangster stuff. Overall it has a nice gritty and dark look throughout, this is the writer/director Michael R. Roskam’s first feature film but it’s pretty clear he has got quite a bit of talent. Schoenaerts plays an excellent empty eyed psycho struggling with some very disturbing problems and I look forward to seeing him across the screen from Marion Cotillard in Rust and Bone (Audiard, 2012) which I now notice is directed by Jacques Audiard so I can only assume it will be up there for best foreign film next year. I think the word transforms is thrown about a bit too loosely when talking about actors and their roles but Schoenaerts literally (nope, figuratively) transforms to the point where I am pretty sure they could have just used a live bull by the end of the movie.

Footnote truly exemplifies and reminds us all of that unforgettably wise verse from the Talmud “thou shall protect thy father and honor no one above him unless it be-ith me, thy sweet Lord.” Now this film was not nearly as entertaining as Bullhead but enjoyable nonetheless. The story is about a father and son who are both academics in the narrow field of Talmudic studies but are vastly different in most other areas (the exception being that they are both great at not being great at being dads). The father, Eliezer Shkolnik (Shlomo Bar-Aba), is a cold pedant while the son, Uriel Shkolnik (Lior Ashkenazi), is successful and well-liked and after decades of being passed over, in a surprise decision, the father receives the prestigious Israel award and conflict arises when a fairly obvious twist presents itself. The preview, which I saw after the film, seemed fairly misleading and makes the movie out to be more of a quirky comedy rather than the awkward drama it turned out to be but then again it was in Hebrew so I may have missed some of the comedic subtleties. I have not watched anything else done by the director or the two main actors so nothing really to say on that front other than they were pretty good but as I am writing this my opinion of this film is dropping lower and lower, I can’t really think of anything that truly stood out about it but c’mon it was nominated for best foreign film so I feel as though something should be of redeeming value in it, perhaps it is a mistake to judge this after only one showing since it can be tough to catch all of the dialogue and the acting and directing nuances simultaneously of course that appears to defeat the entire purpose of this article sooo…moving on.

I meant to watch In Darkness (Holland, 2011) another foreign film nominee but decided the Holocaust was a bit too much of a bummer at this time and I would rather see Brazilian special police use excessive force on some drug dealers and corrupt cops. It was on the IMDb Top 250 at some point in time but now despite it being listed as an 8.1 I cannot find it on the list. If you could not tell from the II in the title, it is a sequel that takes place a few years after the events of Elite Squad (Padilha, 2007) continuing to follow the newly promoted Lt. Colonel Nascimento (Wagner Moura) as he attempts to destroy the cartel that has moved in and replaced all the drug dealers he killed in the last movie. The director is Jose Padilha, the same man who did the documentary Bus 174 (2002) a film I saw so long ago I forgot most of what it was about (a bus hijacking/hostage crisis) which as it turns out included footage of Rodrigo Pimentel, a SWAT instructor, who would later go on to write a book about his experiences in the Special Police Operations Battalion a.k.a. BOPE that would be turned into a movie that would have a sequel that is called Elite Squad II: The Enemy Within. The film also has quite a few similarities to the amazing City of God (Meirelles, Lund, 2002) just told from a police officer’s point of view and this is for good reason as the screenplays were written by the same guy Braulio Mantovani, who also had a hand in Bus 174. It appears there must be a small cadre (a word I peppered in attempt to use a bit of Spanish but as it turns out is actually French with Latin origins and never mind the fact that the official language of Brazil is Portuguese) of Brazilians who are able to spin out intense favela (now that has got to be Portuguese) centered action dramas better than the rest. Either that or I have very little insight into Brazilian film. Also going back to Padilha, he is set to direct the new RoboCop (2013) which looks like it might stand a chance at being decent (despite the obvious drawback of being a remake) for a number of reasons but initially my opinion was made when I saw Joel Kinnaman was going to be in it since he is the main reason I watched all of the television show The Killing (2011).

I had been meaning to take a look at Doctor Who for a while now, I thought I had only heard good things about it but I can’t really remember who I know who has actually watched it so I may have just assumed I heard good things. Right away there was a bit of an expectation shock, in terms of quality for some reason I was thinking it would be along the lines of Sherlock (Gatiss, Moffat, 2010) and Luther (Cross, 2010) but it isn’t even on par with MI-5 (Wolstencraft, 2002) (which is a great show but the cast turnover makes it pretty tough to connect with any of the characters, they could take a serious lesson from MI-6, I mean James Bond is still alive after 60 years despite every villain in the world knowing his name but somehow a whole fleet of MI-5 agents gets murdered each year). By quality I mainly mean two things, the production value and the story content. I thought for sure while watching the first episode, where evil aliens cause manikins come to life, that I had loaded up the wrong show but no sure enough it was Doctor Who. I got over the cheesy look pretty fast but I am still a bit disappointed that the plots are not more complicated, quite a bit of emphasis on the fiction and not so much on the science. And I understand that I have only observed the show for 15 episodes out of almost 800 episodes (roughly 2%) over 40 years and those 15 episodes are about 700 episodes into the series (roughly the 87th and 88th%’s from the fall of 1997*) so I blame myself far more than I blame the show, I am surprised they were able to capture my attention at all. Also I understand that some of the look is intentionally cheesy (i.e. the Daleks) because they were in the show way back when and to keep true to the story they were not given a facelift, bold move that I am sure pleases the diehards but that doesn’t stop them from looking ridiculously outdated. Christopher Eccleston does great, Billie Piper starts out average but quickly picks it up, and there are quite a few decent cameos here and there. My favorite episode was probably the Father’s Day one despite the preposterous flying whatever-they-weres, it seemed like the tipping point for me where I actually became invested in the show. The reason I started watching in the first place was to get a look at more of David Tennants work but unbeknownst to me he doesn’t take over the role of the Doctor until season two so now I will probably have to continue on with the series which is just fine by me. 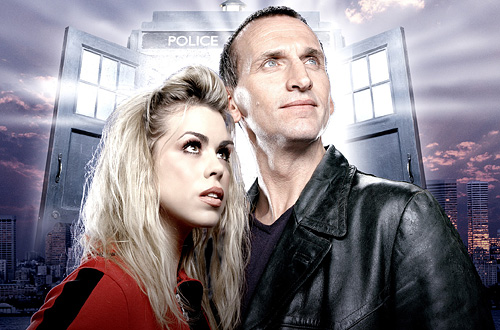 *if the percent’s were somehow ordered chronologically and the series ran continually, playing a little loose with the numbers on this one.